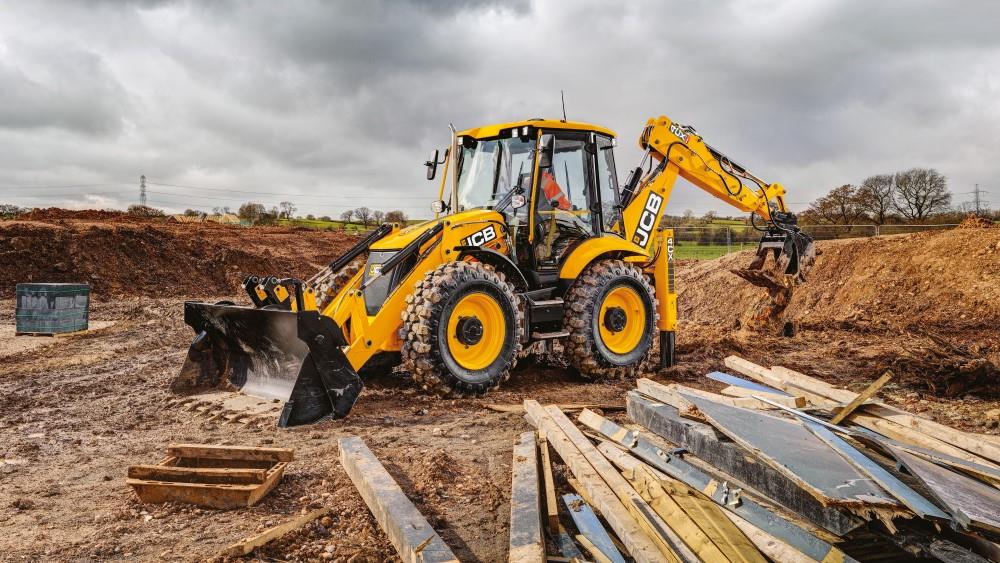 Sometimes you can wait all week for decent new product announcements, then JCB sends several over all at once...

Leading the bunch, the company annouces that the 3CX, 4CX (above)  and 5CX PRO backhoe loaders will now have Stage V-compliant engines. The 3CX PRO is a two-wheel steer machine, the 4CX PRO boasts all-wheel steer for improved all-terrain performance and the four-wheel steer 5CX PRO delivers optimal specification for bulk earthmoving.

For Stage V, the 4.4-litre JCB 444 engine has been replaced by a 4.8-litre JCB 448 motor, and the previous 68kW rating becomes 81kW with 516Nm of torque. While the new powertrain and gear ratios enhance fuel efficiency, and the cab has been updated inside and out.

Next up, new excavators in the compact range. At the smaller end of the scale, JCB is launching a 3.5-tonne zero tailswing compact excavator and a new 3.6-tonne conventional model, thus expanding its ‘Next Generation’ line-up to meet customer demand.

Topline features include larger ROPS cab/canopy with new instrumentation, improved dig depth and a re-profiled dozer blade. The 35Z-1 zero tailswing model is a replacement for the previous generation 8035ZTS, and the 36C-1 is a totally new model in the JCB range. Both machines are powered by a three-cylinder Stage V/T4 Final Perkins engine delivering 18.4kW.

Moving up a notch, JCB has upgraded its 4-6 tonne compact excavator line-up, with the launch of three new models. The zero-tailswing 50Z-2 replaces both the previous 48Z-1 and 51R-1 models, the 56Z-2 (below) takes over from the 55Z-1 and the conventional tailswing 60C-2 replaces the 57C-1.

All machines are powered by Stage V compliant 1.7 litre-litre, turbocharged three-cylinder Perkins diesel engines, delivering 34kW. They are equipped with a Diesel Oxidation Catalyst (DOC) and a Diesel Particulate Filter (DPF), meaning there is no requirement for a Diesel Exhaust Fluid such as AdBlue. A new cab with a revised front screen improves visibility, while operators are able to programme auxiliary hydraulic flows for up to ten attachments. All machines have 500-hour service intervals.

Loadall telehandlers next, and JCB reveals that all models are now available with Stage V compliant engines. From the 531-70 through to the 540-200, the full range can be powered by the JCB 448 DieselMAX engine, delivering 81kW.

External dimensions and turning circles remain unchanged, but beneath the hood JCB has combined a DOC, a DPF and Selective Catalytic Reduction (SCR) in a compact one-can solution. The Stage V engine uses an electronically-controlled Proportional Wastegate turbocharger with new injectors to improve cold-starts. An auto-stop feature kicks in if a machine is left idle for more than three minutes.